In the last few years fake moldavite has been appearing in growing amounts via different distribution channels and of course on the internet. Actually, it’s nothing new: some 120 years ago jewellery makers did the same using green glass instead of cut natural stone…
Today, even the natural stones are made artificially. The sources are depleted, a law introduced in 2019 made illegal mining much more complicated, and due to Covid restrictions no collectorS’ trade and exchange shows are held… Demand from all over the world and limited volume on the market cause the prices to rise as well as a temptation to make fakes.
Fake moldavites occur mostly outside Europe, especially on the Asian and American markets, where people have hardly ever seen a real moldavite and traders take advantage of this. For the production of fake moldavites, ordinary green glass is cast into a prepared mould and then worked mechanically and treated chemically to create the „right“ surface appearance.
Typical examples of fake moldavites can be found in the global e-shops (such as ebay, etsy and wish) where the seller is usually hidden behind a virtual identity.
Here are some very suspicious-looking examples which, we are pretty sure, are no moldavites but fakes made of ordinary glass: 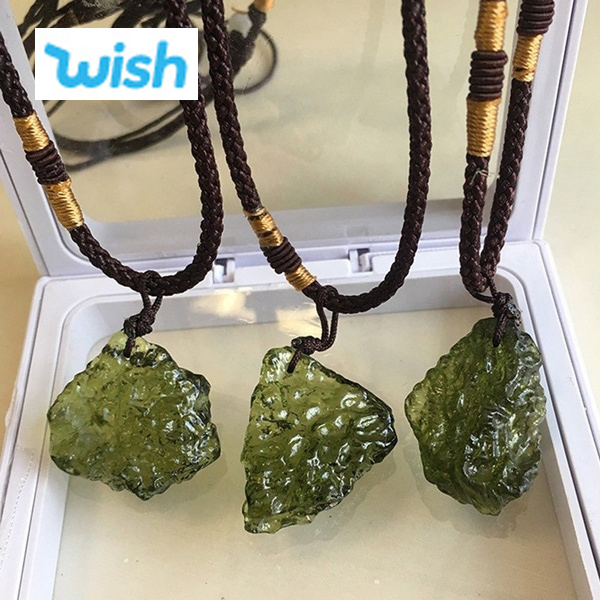 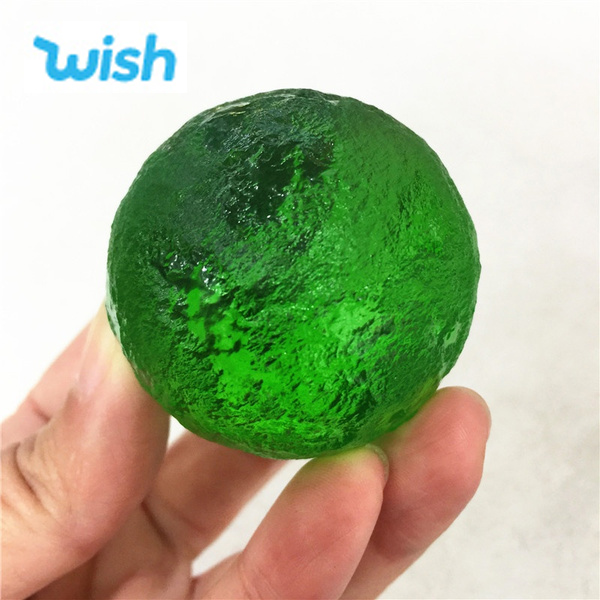 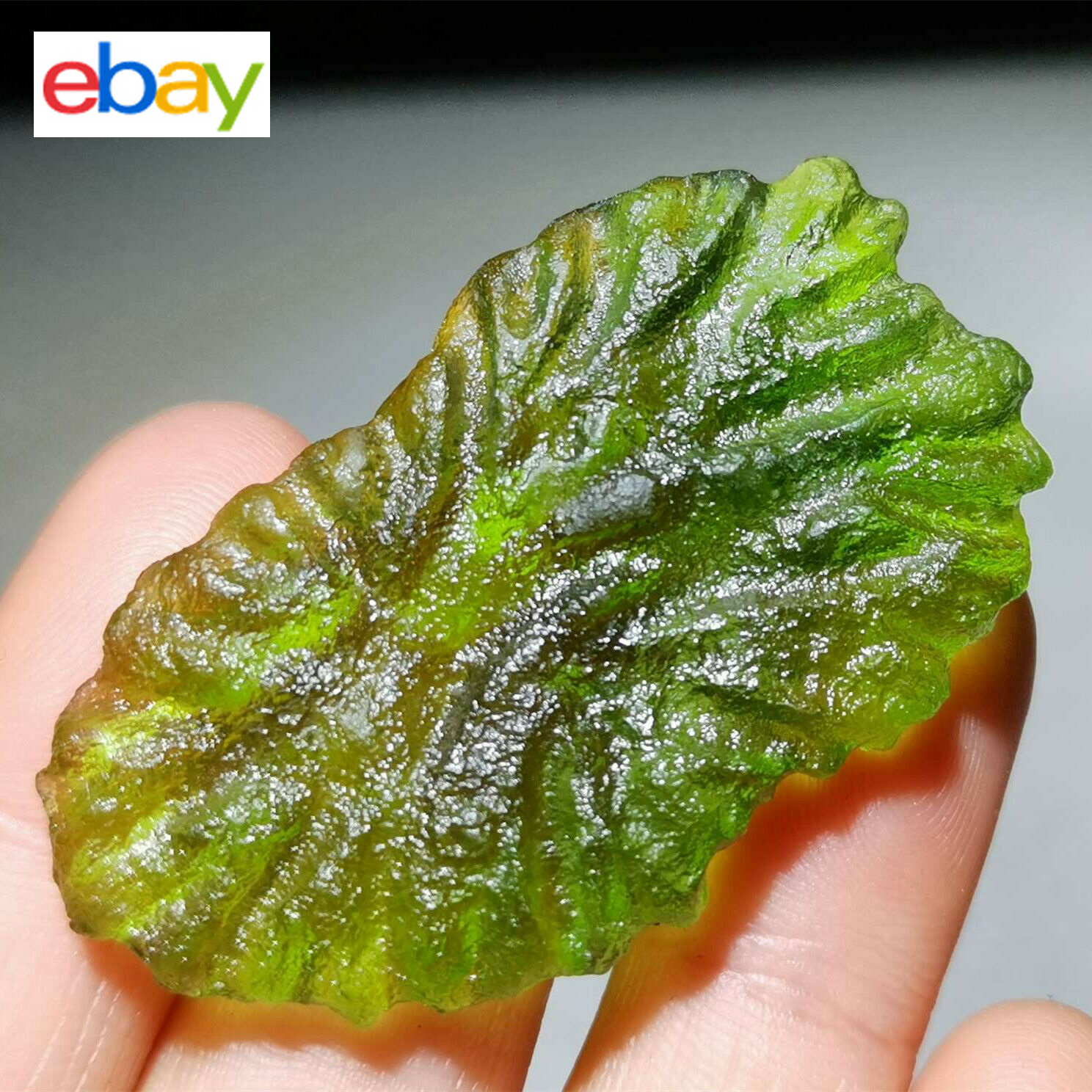 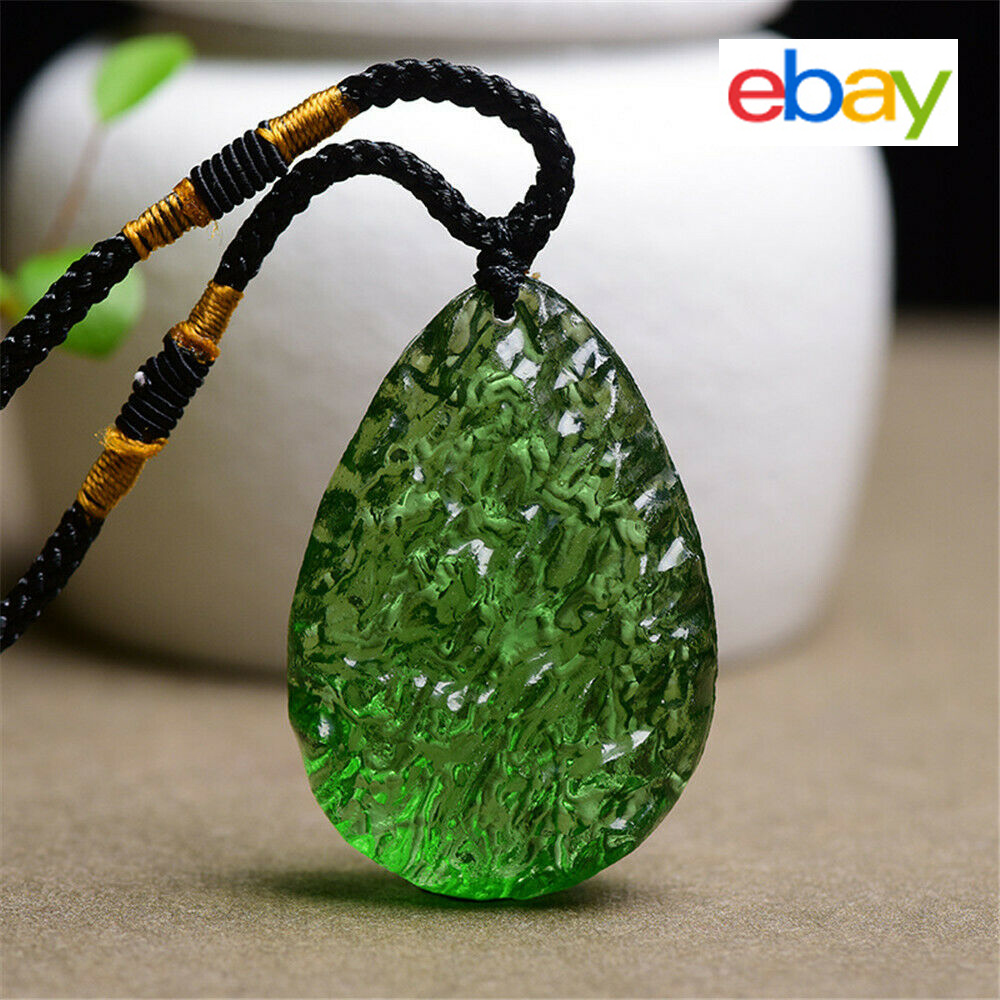 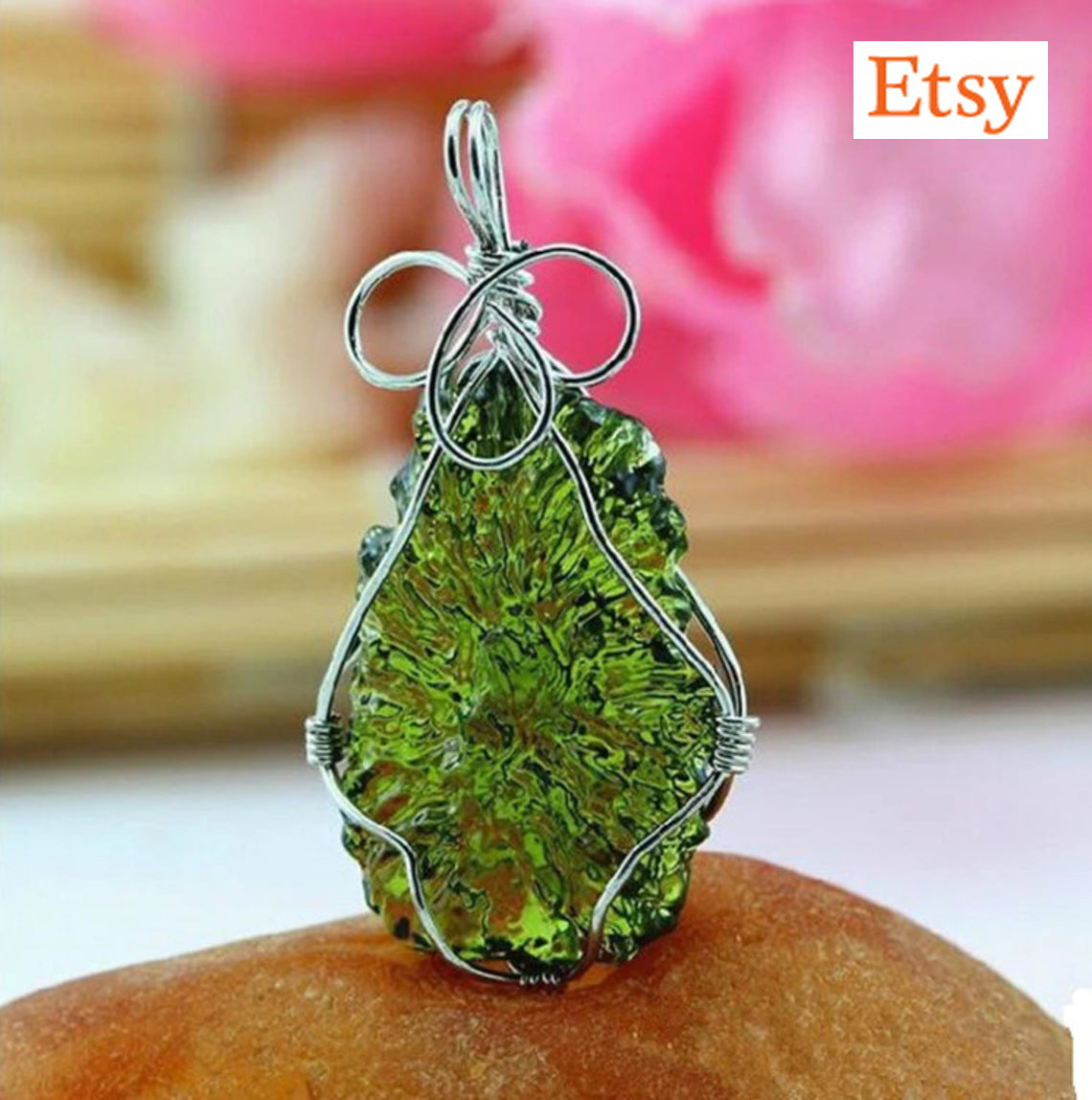 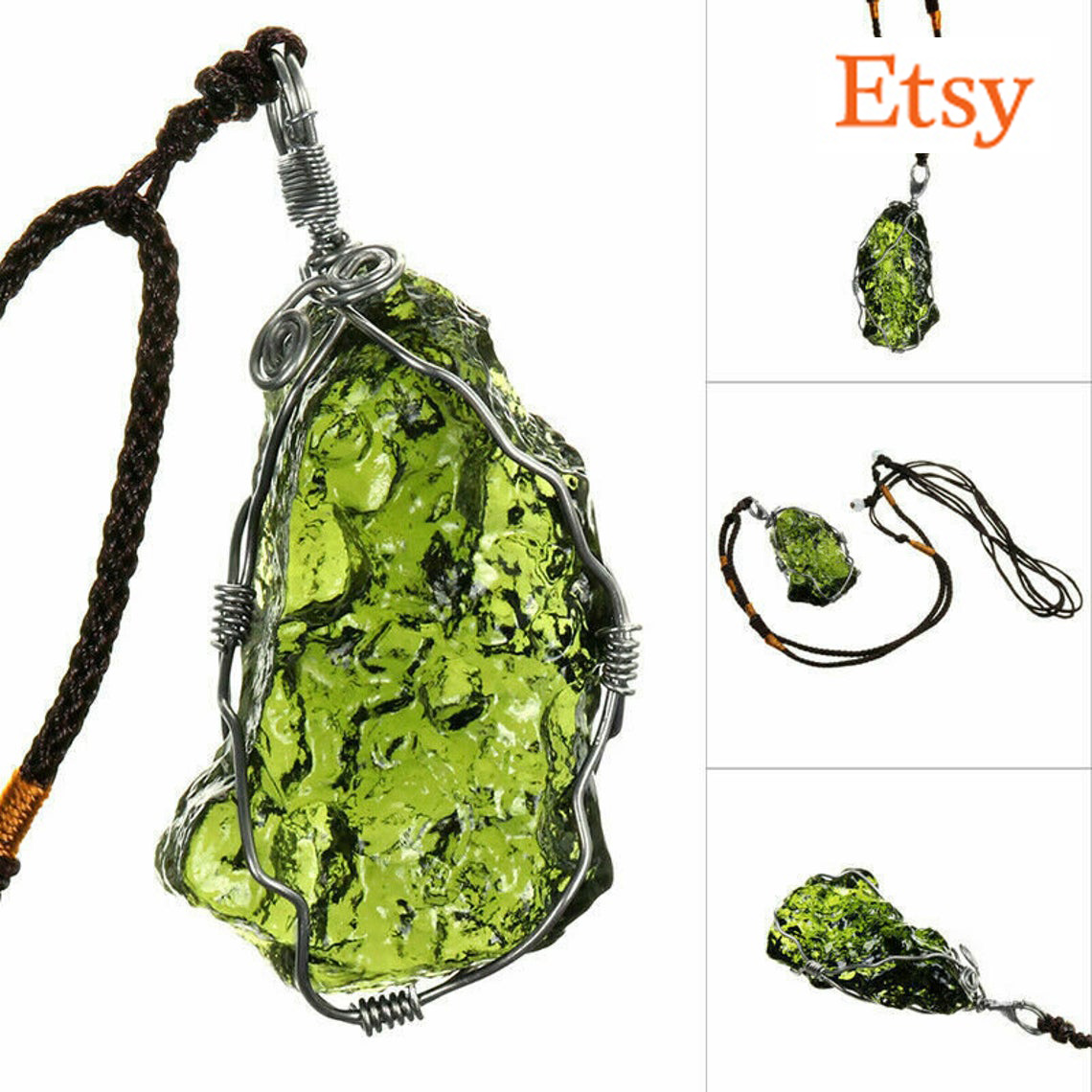 Natural (raw) moldavite stones are unique, each piece sculpted differently by the forces of nature, like THE branches of a tree or human fingerprints. So it is somehow strange if there are identical „natural“ moldavite pieces as in these pictures all from different shops! The explanation is simple: they were created artificially in the same series.
At first glance these fakes are of unusually vivid green color, with tones of emerald and peridot, and a very shiny surface. Yes, there were a few pieces of moldavites found, either with shiny surface or of extraordinary shades of green, but these are so rare they end up in the finest collections or mounted in very fine jewellery. Definitely not exported in kilograms to Asian manufacturers…
Another observation: no one selling fakes knows the locality where the so-called stones were found, nor is able to prove it or provide the usual documents from the Czech exporter.
We ordered one of these pieces to see if it is a fake moldavite. This is what arrived at our Museum: 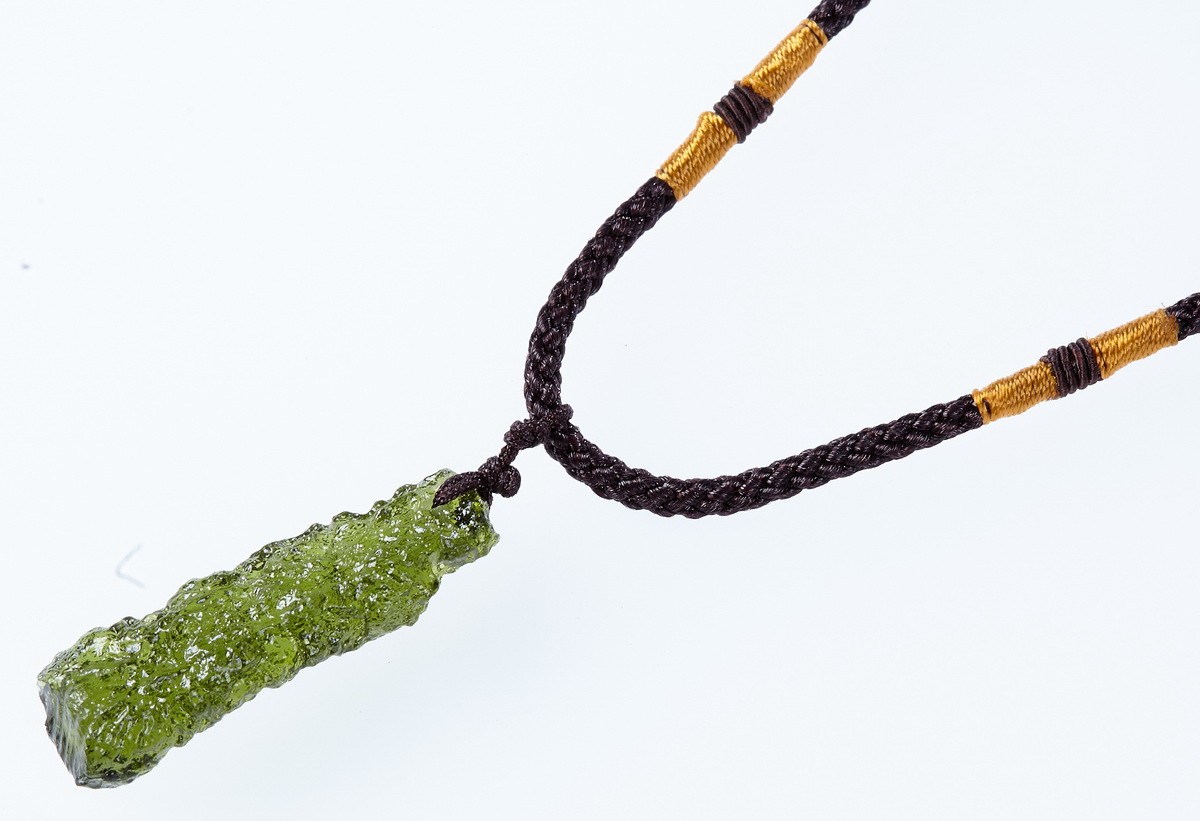 It is clearly a FAKE!
But, in order to be sure, we had it examined scientifically by two renowned independent gemologists. Both confirmed: it is a fake.

Buying a moldavite stone from the Moldavite Museum, you will be sure of gettin a real one, and you’ll be told exactly the place where it was found. All our moldavites and jewellery pieces with moldavites are provided with a certificate of authenticity.